NOTE: This is the second in a series of articles on Bitcoin and inflation. Part 1 can be found here.

Bitcoin was designed not just as a digital currency, but as a characteristically different kind of currency. For example, in the way it functions…

…and the way it’s organized…

Money has never worked like this before. And it’s why, unlike other money, Bitcoin can not experience inflation.

All Bitcoin is minted according to specific rules, on a specific schedule. That schedule and those rules were laid out in 2008, and they’ve been operating the same as ever since then. Here’s how it all works:

As people trade Bitcoin around the world, their transactions are submitted to the public for review. Individuals and institutions who run “mining” rigs–specialized, high-power computers–process these transactions into groups called “blocks.” Whichever miner completes the process quickest is rewarded by the algorithm with new Bitcoin–these days, 6.25 BTC. This sequence of events repeats itself every ten minutes or so.

(Since BTC is worth about $60,000 as of this writing, it means that every ten minutes–even as you’re reading this article–nearly $400,000 worth of Bitcoin is being added to the global supply. Or, another way to think about it: around $55 million worth of new Bitcoin will come into existence today.)

And yet, 6.25 Bitcoin would have seemed tiny to miners five or ten years ago. When the network first launched, the reward for mining a new block was 50 Bitcoin. After about four years that figure was cut in half, to 25. After another four years, 12.5. 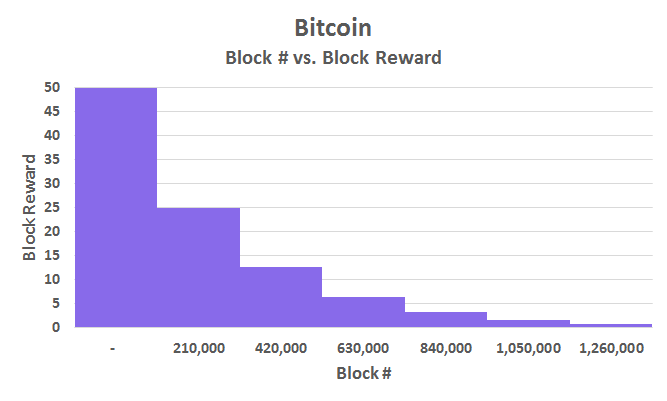 You can see the pattern, then. Every four years–once for every World Cup, every U.S. presidential election–Bitcoin’s inflation rate automatically halves. The last “halving” occurred in May 2020, so around 2024 it’ll happen again. At that point, 3.125 Bitcoin will be created every ten minutes. In 2028 the number will decline to just over 1.5. We’ll keep following this asymptotic pattern until, one day, there will be no new Bitcoin at all.

According to the rules of the network, the maximum number of Bitcoin that can ever exist is just under 21 million (specifically, 20,999,999,9769). It’s predicted that we’ll reach that milestone around the year 2140.

Together, these two facts have some interesting implications for the long-term value of Bitcoin.

For one thing, Bitcoin’s real (adjusted) inflation rate is always in decline. Every ten minutes, the mining reward represents a smaller and smaller portion of the total supply.

To demonstrate, let’s look back at the very first minutes of Bitcoin’s existence:

Fast forward to today, when nearly 19 million Bitcoin have already been generated. Every ten minutes, that number goes up by 6.25. And, every ten minutes, 6.25 Bitcoin represents a slightly smaller percentage of the total pie.

Its supply still is growing larger every ten minutes, though, so you’d assume that Bitcoin experiences inflation. Interestingly, that isn’t the case.

Inflation describes a general increase in the prices of goods and services, or, in other words, a relative decrease in the purchasing power of a currency. So when your groceries, your gas, and your holiday gifts start to cost more, we call it inflation.

Sometimes inflation occurs because more people are spending more money faster–as we’ve experienced recently, for example, coming out of the COVID-19 pandemic. Sometimes inflation occurs because central banks print lots of cash–with more money competing for the same number of goods and services, the prices of those goods and services tend to go up.

Bitcoin’s value doesn’t decrease as a result of spending because it’s an investment asset. Almost nobody uses their Bitcoin to purchase things.

More importantly, Bitcoin doesn’t experience currency debasement despite its constantly increasing supply. That’s because everyone already knows how much Bitcoin there will be in the future. There are no surprises. A Bitcoin connoisseur in 2009 could’ve told you, with a high degree of accuracy, how much Bitcoin there would be in circulation today. Similarly, you today can calculate how much larger the supply will be 10 years down the line, or even 50. Because it’s all so predictable, the effects of Bitcoin’s increasing supply in the future are already baked into the price you see now.

(Here’s a fun fact to show how small Bitcoin’s 21 million cap really is: there are currently around 56 million millionaires in the world. So if they all decided that they wanted one whole bitcoin, they’d be fighting over them.)

The only way Bitcoin could experience inflation is if the rules of the network were to change–if, say, that 21 million max cap were raised. But, as we’ll see, the likelihood of this happening is quite far off.

The paper money you’re used to is created and distributed by “central banks”–powerful institutions which act on behalf of national governments. The few people who work for these institutions control how much money there is in the economy by implementing policies like reserve requirements, quantitative easing, or simple money printing.

A lot of the time, these people make good decisions that benefit economies. If you have U.S. dollars, euros, yen, or won in your wallet right now, it’s because the central banks supporting those currencies have created an environment in which that paper is trusted to be worth something.

Sometimes, though, the people at these central banks make very bad decisions. Most famously, Germany spent lavishly on World War 1, then tried to make up for it by issuing government debt securities. Without enough tax revenue to pay back those bonds, though, their native currency inflated out of existence. 1 Papiermark in 1918 would’ve bought you as much as 1 trillion in 1923.

There’s some grey area, too. Consider, for example, what’s happening right now in America. In response to the COVID-19 pandemic, the U.S. Federal Reserve began multiplying the amount of cash in circulation a few times over. Was it the right thing to do? A lot of smart people still disagree. It may have saved the economy from a long-term recession, but it also laid the groundwork for the inflation we’re experiencing right now.

The important point here isn’t whether one policy is good or bad, or one currency is valuable or not. It’s this:

By contrast, no small group controls the supply of Bitcoin. That’s because nobody in particular can decide anything in particular about Bitcoin.

Where most organizations are hierarchical–governments have presidents, companies have CEOs, schools have principals–Bitcoin is decentralized. That means there is no single locus of power that makes decisions in the way that a president or CEO would.

(Bitcoin does have a single creator–Satoshi Nakamoto–but when Satoshi published the network, he/they handed over the keys to the community. After the first Bitcoin block, everyone in the world had an equal opportunity to earn Bitcoin, and use that Bitcoin to participate in community decision making. Satoshi was no exception.)

Rather than a single person or group, it’s the public that decides on any changes to Bitcoin. This is done through a process called “proof of work,” according to the principles of “consensus.” But the details aren’t important right now. All you need to know is that, in order to change Bitcoin, over 50% of the network has to be in agreement. There are positive and negative consequences to this way of doing things.

On one hand, Bitcoin is very slow to change. Some of the most serious issues facing Bitcoin today–like its climate impact, and transaction throughput–remain unaddressed, because getting enough people to agree on a solution is so challenging. Even relatively minor network adjustments–like SegWit and SegWit2x–have caused outright civil war in the community.

On the other hand, Bitcoin isn’t subject to the kind of shortsighted decision making that affects government currencies. No small group of people can, for example, decide that there should be more Bitcoin, or that it should be distributed more quickly. And so, Bitcoin has resisted any attempt to improve the short-term market at the risk of long-term inflation.

So those are the basics. Except, inflation isn’t just about money supply, it’s about how people use money. In consumer markets, inflation is influenced by how much people are spending–the more gas and blenders and treadmills we buy, the more expensive they get.

Through its 13 year history, people have handled and used Bitcoin very differently than they have government (fiat) money. These behaviors have had an interesting effect on the value of BTC, by causing not inflation but actual deflation. Shep
Serial entrepreneur, jack of all trades, started first online business in 1997. Survived the dot com crash and operated for 24 years. Ditched our physical office in 2007 and ran virtual for 14 years after that. Sold during COVID lockdown (and highpoint for our business). I'm a husband, father, gardner, meditator and investor. Love the water, energy-work, trees, bonsai and bitcoin!

@andycwest #HOPE. Playing out in classic fashion in 2022. #macro

Now let's see what markets do. The next FOMC isn't until Sept 20-21, and there's still WAY too much Money Supply out there. Are the few remaining Active market participants going to chase lagging performance higher? Is the Fed going to let them?? https://twitter.com/therationalroot/status/1527390993892487168

Financial bubbles tend to decline sharply in the weeks following the peak, but they rarely crash directly. Rather, they tend to spend time consolidating, with an alternating sequence of fresh losses followed by “fast, furious, prone-to-failure” rebounds... https://www.hussmanfunds.com/comment/mc220707/

Whether or not it's accurate, It will always be funny!!

I'm overdue on updating the fed pivot indicator, and frankly it's showing we have arrived already

As they gear up for 75bp in a couple weeks, they would be knowingly blowing up the system

My @BloombergTV discussion with @emilychangtv includes a post-mortem on @MicroStrategy’s #Bitcoin Strategy and a review of the top ten hurdles that the industry must overcome as it crosses the chasm and achieves mainstream adoption.

Dan Tapiero at 51:10 - "It still takes 15 years to be able to manage yourself to be calm and rational in these extreme moments!". A great listen.

Feel we reached some clarity here. Worth a listen.